Cottenham United F.C. was formed in 1899. The club was the idea of the deputy Headmaster of the village school, Mr Gibbon. A well-known personality of the village, Mr Thomas Ivatt, was elected as Club President. He held this position for the next 30 years and is rightly regarded as the father of football in Cottenham. Thomas was not only president, he played for the team, he did all the administration for the team and anything else that needed doing. He owned a field along the Histon road and allowed the club to play their matches there. The field was so rutted that it was known as the ‘asparagus field’.

The matches in those days were well attended by the village people and the ‘feast Tuesday’ game as it was known could attract anything up to 600 people standing 5 deep round the pitch. Matches in the early days were fairly local but the team travelled as far as Stetchworth sometimes. Transport was in Tom Collin’s (the goalkeeper) horse drawn cart. After the First World War games were as far away as Saffron Walden and transport was by bicycle (or cycle crossbar if you didn’t own a bike) until Harry Sarjeant’s Dad got a lorry (solid rubber tyres so it was fairly bumpy). In those days players had to be very fit and dedicated to the club and the game of football.

In 1939 the club moved to the King GeorgeV Playing Fields, down Lambs Lane. Fundraising then started in earnest and the social club and changing rooms were eventually built in the early 1970’s.

At the time of the 50th Jubilee dinner in 1949, another 16 trophies had been won and in that year the club actually won the Premier League Cup.

In 1978 the first Colts teams was established and the group have gone from strength to strength with teams now stretching across all ages from the age of 5 to 17, including one girls’ team.

Veterans football was started at the club in the early 1990’s and was enjoyed by all before folding in 2017/18 season, we hope for a return soon.

By 1985 the club had 4 teams playing and in the following years up to 2006 the club went on to win another 27 trophies. 1986/87 in particular was a special season with all four teams getting promoted, with the Reserves team achieving their highest ever position in the Kershaw Senior ‘B’ division. 1988 saw the First team winning the Fulbourn Cup (Terry Wilson Cup) and in 1989 winning the FA Challenge Cup (winning 2-1 against Gamlingay) to name a few. In 1996 the club won Kershaw senior ‘A’ league and was promoted to the Kershaw Premier League (the top amateur league in the county) and stayed there for 20 years before being relegated back to Kershaw Senior ‘A’ in 2016, which is where we stand today.

The year of 1992 saw girl’s football start at the club. Nigel Lawrence coaches them, wife Jen looked after them and the team was born. The girls matured into Cottenham Ladies and played in the Eastern Region Women’s Football League. In 2006 they played in the women’s FA Cup. This was the first ever FA Cup match played at Lambs Lane. Unfortunately, in 2007, due to lack of numbers, the ladies Football team had to cease at the club, a great shame, but maybe one day it will be revived.

On the 16th July 1999 the Football Club held its Centenary Dinner, a massive event in its history.

In 2004 the club gained the status of a ‘FA Charter’ standard community club.
The facilities of the club continued to improve with new refurbished changing rooms in 2005 and in 2006 the Parish council gave some extra land for the club to use as a show pitch. This was seeded and cables laid for floodlights which came on line a bit later ready for the 2008/9. Changing rooms were refurbished again one more time in 2013 to meet latest regulations of the Kershaw Senior Premier league before moving into a brand new facility ‘The Sports Pavilion’ built in 2015, on the opposite side of the pitch from the village Hall and social club, with 4 changing rooms, a common room and kitchen and 2 referee changing rooms. These facilities are shared with the Cottenham Colts and Cricket Club.

For a long time the club has had four teams but sadly over recent years, as experienced in many grass root football clubs, Cottenham have seen the number of teams dwindling. The B team’s last season was in 2008/09 and then the A team finished in the 2017/18 season. We now run 2 teams , the 1st and Reserves in the Kershaw Senior A and Mead Plant & Grab 3A league.

In 2005/06 season Cottenham United First team finished third in the league which is the highest position achieved since the start of the 2004/05 season, from which records readily available. They also reached the final of the County Challenge Cup, losing by a small margin of 1-0. The club also had the honour of having four of its players selected in the successful County Representatives Squad. The Reserves also had a good year wining promotion and the Creake Shield Trophy. The latest silverware won was in 2014 with the First team managed by Chris Tuck, winning the Cliff Bullen Challenge Cup 1-0 against Great Shelford. Played at Histon glassworld stadium.
Along with 2010 and 2016 Cottenham 1st Team won the Cottenham Cup and in 2018 the Reserves won the Ken Garner Memorial Tournament.

As for this season, 2019/20, due to the outbreak of coronavirus we’ve had to finish the season early, so the final league positions were decided based on a ‘points per game’ system which resulted in our First team, managed by Chris Hancock (who has been with the club for many years as a player) finishing 5th in Kershaw Senior ‘A’ and Reserves managed by Luke Cox finishing 11th in Mead Plant & Grab ‘3A’.

So….. many people have been a part of the club’s history, from playing, watching, managing or being part of the committee and there are quite a few who can tick all of these roles. There are many who have devoted years or even decades to this club, a community club that holds lots of fond memories for many people. Since Thomas Ivatt right at the start there have been, and still are a number of people who have given a great deal of time and energy to Cottenham United. One lady washed the kit every week for 25 years and one Secretary paid the affiliations fees out of his own pocket, as the club had no money. Just a couple examples of the many people who over the years have volunteered or made donations to support the club; people like this have made Cottenham United a first class club for the whole village community

So to the future which holds much promise: there is a strong Cottenham Colts set up in the village, bringing potentially new players in as they move from Colts to Senior Football, a new village hall is being built, which will be our new club house and will go hand in hand with the fantastic changing rooms facilities in the Sports Pavilion. The foundations are there for the club to continue, grow and hopefully be successful along the way. Cottenham United is one of the longest running clubs in the county, (coming up to celebrate 125years in 2024) and the Club wants to be in the forefront of Cambridgeshire Football and be proud to be a part of the community of Cottenham for many more years to come.

I would like to give thanks to contributors to this brief history, Chris Richards and Chris Bridgeman. If anyone has any photos, dates or stories or any further information please do contact us as we want to build on the archive we have already and find more about the club history.

Pictures of the teams past 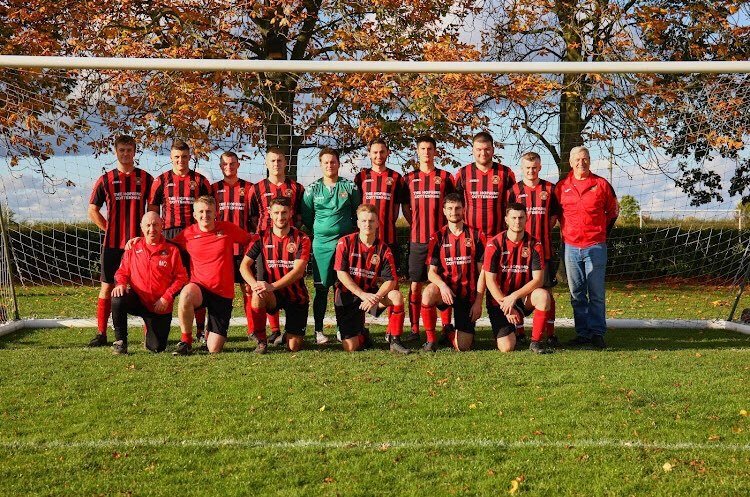 Upcoming Matches
View all matches
Scroll to Top
We use cookies to enhance your web experience. By continuing to use our webpage, you agree to our use of cookies.